Skip to content
5 amazing Bible stories where less is more 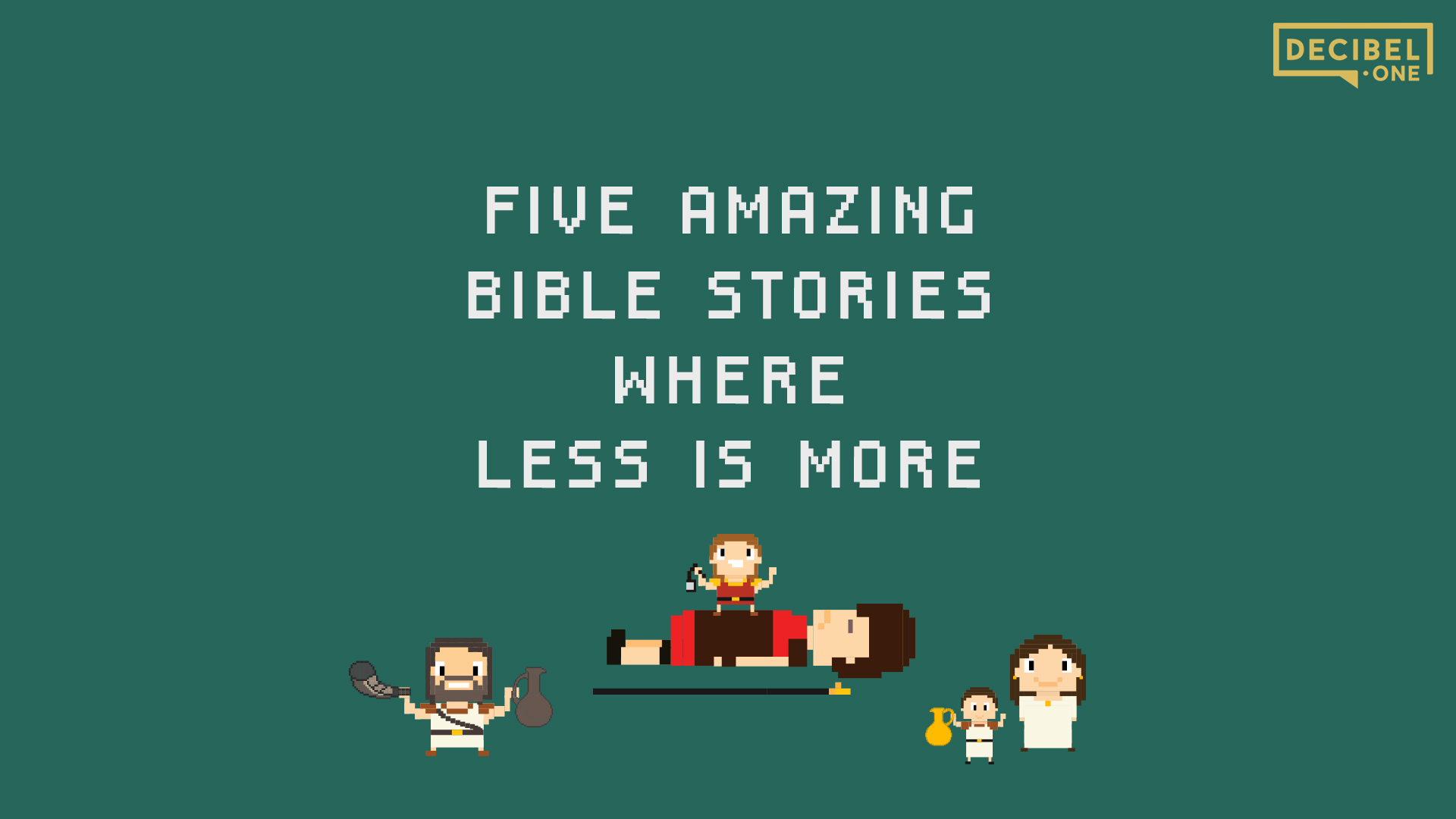 All through the Bible, we see God working with the smallest and/or unlikeliest of people, resources, and situations to do amazing things—even in Christ’s finished work at the cross (scroll down to find out why)!

And because God is the same yesterday, today, and forever, your weaknesses and not-enoughs won’t stay that way in His hands. They become opportunities to display His power and strength in your life, just like He has done for the people below. Read on, be blessed, and share this post with three friends who need to hear this!

Teenager kills giant with a sling and stones

You may be young like David (who was only a teenager when he killed Goliath), not feel like you have much (David only had a sling with stones as ammo), but knowing the Lord fights your battles for you makes all the difference (Goliath came tumbling down!). Check out this exciting story in 1 Sam 17! See how what you perceive as minuses in yourself are the perfect areas for God to display His amazing grace and power.

It’s a well-loved Bible story and the only one that appears in all four Gospels: How our Lord Jesus multiplied a little boy’s lunch of just 5 loaves and 2 fish to feed 5,000 hungry men, not including women and children (full story in John 6). Today, what do your 5 loaves and 2 fish look like to you? Is it your amateur skills, inexperience on the job, or anything else that feels insufficient? One thing we know: You can bring your little to Jesus, involve Him in what you’re facing, and He’ll multiply it beyond your wildest dreams!

Meet the original 300 in the Bible—Gideon’s army of men who were vastly outnumbered against their enemies, the Midianites. Can you believe that Gideon HIMSELF also felt like the weakest in his tribe? Yet God called him a mighty man of valour, and told him, “Go in this might of yours, and you shall save Israel from the hand of the Midianites.” (Judg. 6:14) And save them, God did! Friend, it’s powerful to acknowledge your weaknesses and not-enoughs—but ALSO that God is your strength in every one of them. Will you start practising this today, and see your little become much with Him?

One jar of oil > insurmountable debts

Have you ever said, “I have nothing but ”? So did a widow in the Bible whose creditor was coming to take her sons as slaves. “I have nothing in the house except a jar of oil,” she said (see 2 Kings 4:2, NASB). But as you can see above, God worked an amazing miracle with even the little this widow had (full story in 2 Kings 4:1–7!). Today, He’s ALSO able to work with your skill/money/resources, however small you might think they are. Will you not despise it, but give it to the Lord and let Him multiply it beyond your wildest dreams?

His body was covered with wounds, with not even a sliver of skin left on His back. Blood coursed down His barely recognizable face, as a crown of thorns dug deep into His temples. He was nailed to the cross by His hands and feet—it was one of the most horrible ways to die. But who would’ve imagined that the most humiliating and painful way to die (in Roman times) would become the most powerful and only way to save mankind? Jesus, in dying on the cross, was bearing the punishment for OUR sins. Not to mention opening the floodgates of God’s blessings into our lives (see Rom. 8:32), AND altering the eternal homes of all who believe in Him from hell to heaven? Somebody give us an AMEN. Truly with the Lord, #LessIsMore.

Are calling and destiny just overhyped buzzwords we grew up with in church?

When life gets complicated, are "calling" and "destiny" still something we believe in?

Ever found yourself in an unhealthy relationship, yet confused about whether you should still pray for God to turn things around? ﻿⠀